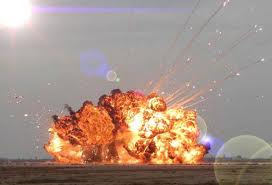 Ezekiel 28:2: This is what the Sovereign Lord says: “In the pride of your heart you say, “I am a god; I sit on the throne of a god in the heart of the seas.” But you are a mere mortal and not a god, though you think you are as wise as a god.

Now, normally, I am not an apocalyptic sort, either sociologically or theologically, but this week there seems to have been some reminders that all our achievements and all our accomplishments as humans (which are many and marvelous, have no doubt), and not the be-all and end-all of our existence.

There was the woman whose car was forced off the Bay Bridge after being rear-ended by a tractor-trailer. This in spite of safety laws and measures on the bridge.

The nose wheel on a Southwest 737 collapsed on landing at LaGuardia airport. Southwest flies this aircraft exclusively and probably there are more of the type flying than any other passenger jet today.

And then there was the terrible derailing of the Spanish high-speed train with at least 78 lives lost.

Each of these tragedies involved some amazing engineering. Each involved a failure of some sort, probably a combination of human and technological factors.

This is indeed a beautiful world in which we live, fully of marvelous things. But it is also a fallen world, prone to accident and danger and harm. We are not gods, and when we act as if we were, we find out differently. Praise to the one true God who reigns on high!