Matthew 7:27: And the rain descended, and the floods came, and the winds blew, and beat upon that house; and it fell: and great was the fall of it.

I don’t know if you’ve ever had the misfortune to play Chutes and Ladders with a child. I have, and I think it has scarred me for life. The game, in case you’ve been lucky enough to never play it, uses a conventional game board adorned with—wait for it—chutes and ladders depicted on it. Players can advance up the ladders to the goal, which is a representation of a first place ribbon, which to me doesn’t seem much compensation for that much time wasted. Gamers can also land on a chute space, which sends them back down the path. That’s what frustrated me—I would be about to land on the blue ribbon when I moved to a chute, which more often than not sent me to the beginning, and so the game continued…and continued…and continued.

Chutes and Ladders could have been worse, though—the game had its origins in India, where it was called Snakes and Ladders. If there’s anything worse than chutes, it’s snakes. No thanks. I’m with Indiana Jones on that one.

Snakes and Ladders originated in ancient India and came to Great Britain in 1892. Milton Bradley picked it up, and the rest is history. The 1892 version was used to teach morality, the idea being that children who climbed ladders (i.e., did the right thing) reached the goal (a nice home, a car, a pony, I don’t know) while children who did not do right took a chute to the lower areas of the board.

I was reminded of this game when I saw several movies in which characters slid down ladders. They did this by clamping their feet to the side rails of the ladder and controlling their descent with their hands. It looked like a pretty good way to burn the palms of your hands off, and as much as I don’t like to be up on a ladder, if I survive the climb to the top, I’m not going to slide back down. I’ll go back the way I came, rung by rung.

I think the spiritual application is fairly clear. We all “climbing Jacob’s ladder” toward our goal of growing in Christlikeness, but if we land on a chute because of something we’ve done, we’re not condemned to languish in the lower regions. Instead, God picks us up, dusts us off and, in the words of the hymn,

Lifts us up and lets us stand,

By faith, on Heaven’s tableland,

A higher plane than we have found;

The chutes are not permanent, but the ladders lead to an eternity with the Father and the heavenly host. Praise to the God who lifts us up and brings us home. Amen.

I don’t know if you’ve had the pleasure of having your car recalled. I have gotten five recall letters for my 2004 Mazda 6 station wagon in the past couple of years, and they all said roughly the same thing: “The air bags on your car could blow up and cause tremendous damage to you and to the car. Bring your Mazda in as soon as possible to prevent this from happening.”

Well. That sounded pretty serious, so I read the second page to find out how to have the car fixed, and there I saw something like, “We don’t have the parts yet for this problem, but we’ll let you know when we do. Good luck and safe driving.”

Right. Two years later, and still no parts. They raise the alarm and then say, “Oh, just kidding about having your car fixed, but we’re not kidding about your car potentially being an explosive device.”

I don’t get it. How can a major corporation say “Yes, there is a problem,” and then “No, we can’t fix it just yet.”? Why keep sending out these letters? Why not wait until the parts come in?

It occurred to me that this example is but one of many in our world where people say one thing and do another or offer solutions that really don’t solve anything or contradict themselves and think nothing of it. We’ve all been affected by such behaviors, and the potential for destruction and ruined lives and relationships is immense.

Jesus said, “Let your ‘yes’ be ‘yes’ and your ‘no’ be ‘no.’” He understood that there was no need for elaborate oaths and extended promises. Just say it and do it. And of course, Jesus relied on the promises of God, which go all the way back to the beginning of the Biblical story: the Garden of Eden, Abraham, King David, the prophets, Joseph and Mary, the apostles, and so on. God’s promises are true, and we can depend on them to come about. Mazda Motor Corporation apparently doesn’t understand the importance of this, but God does, and for that we should be eternally grateful. Amen. 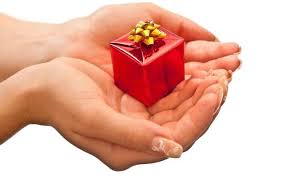 I don’t know if you like receiving presents, but I suspect you do. And I think the best presents are the unexpected ones. It’s one thing to get something on Christmas or your birthday, but it’s different when someone surprises you with something you’ve always wanted. It doesn’t happen often, I think, but when it does, it’s a total joy.

We received an unexpected present this past week when we came home to find a great huge box on our front porch. Now, we get a lot of deliveries, but they don’t come in great huge boxes. They land on our doorstep in boxes that are about, strangely enough, the size of two pieces of music side by side piled about ten inches deep. This unexpected box was about four feet long and a foot wide and deep. Whatever it was, it wasn’t music, unless Joseph Martin had a really strange idea about some sort of magnum opus. But I didn’t think that was it.

When I checked the box, I found it contained a high-performance exhaust system. Then I knew it wasn’t ours since there’s no way it would have fit either one of our cars. When I looked at the address label, I found it was addressed to someone I’d never heard of who lived on a street that began with a “B” and whose house number was 9705. We do live at 8705 Barnett Street, so Fed Ex got the first letter right, and the first number wrong. But the muffler clearly wasn’t something we had ordered.

We called Fed Ex, and, after some wrangling, got them to agree to pick up the box. They wanted to do it the next day, but we allowed as how there were plenty of people out there who might drive by and help themselves to a nice high-performance exhaust system. Fed Ex came while we were out and retrieved the package and that was the end of that.

I don’t think this has ever happened before with a package. We sometimes get misdirected mail, but it’s either for a neighbor or for someone a couple of streets over. We walk it down to the neighbor’s house or put it back in the box for the mail carrier if it’s further away. It’s no big deal.

This episode got me to thinking that God gave us exactly the right gift at exactly the right time when He sent his Son, Jesus Christ. We didn’t have to worry about it being right for us or wonder how it was going to be delivered. All we had to do was accept that gift of grace and love which came to us right where we were, just as we were. And no one can do any better than that. Praise God for the great and glorious gift of Jesus Christ, our Savior. Amen.

2 Corinthians 4:6: For God, who said, “Let light shine out of darkness,” made his light shine in our hearts to give us the light of the knowledge of God’s glory displayed in the face of Christ.

I don’t know if anyone has ever told you that you look like someone else. Supposedly each of us has seven people who resemble us throughout the world. I’m happy to report that four of my look-alikes live in this area, so I have three to go to find them all. These guys are called Charlie, David, Frank and John. I know this because four times someone I didn’t know came up and called me by one of those names. I was at Wolf Trap several years ago and a man came up looking very excited. “Charlie?” he said.

His face fell and he shook his head. “You sure do look like him,” he muttered. I felt bad for him, but there was nothing I could do.

I apparently looked (and sounded) like Jimmy Stewart when I was younger, and someone told me recently that I sounded like Garrison Keillor. I’ll take that.

Then there are people who resemble well-known figures. There’s a woman who comes into Ashton Diner who looks like Amelia Earhart in her thirties. Since I like aviation, I find this very exciting. Then we were at a wedding reception last year when I saw a woman who looked like Meryl Streep.

I went up to her and asked, “Has anyone ever told you that you look like Meryl Streep did twenty years ago?”

She rolled her eyes and then smiled and said, “Only everybody, everywhere I go, but thank you for saying that.” I think I made her day.

When I was in college there was a fellow about twenty years old who looked like Abraham Lincoln during his presidency. We weren’t sure he knew this until he got up at a forum to speak and started out, “Four-score and seven years ago…”

The room went wild. Several people around me turned to each other and exclaimed, “He knows! He knows!” It was a special moment.

The point of all this is there is someone we should resemble, and that person is Jesus Christ. We are called to grow in Christlikeness, and of course that doesn’t mean physically. We who have seen the face of Jesus should practice love, joy, peace, forbearance, kindness, goodness, faithfulness, gentleness and self-control, which are of course the fruit of the Spirit. I pray that each of us may, with the help of the Spirit, speak the truth in love, and grow in every way to resemble Him who is the head—Jesus Christ, our Lord. Amen.