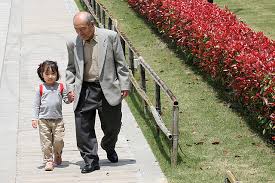 Today’s post is courtesy of Connie Moser, local writer and community activist. I think you’ll find her story touching and inspiring.  Thank you, Connie, for allowing me to post your writing.

Are You Afraid to Die?

I must have asked that question 20 times while walking with my Grandpa. We often “Went for a Walk”. When he asked me if I wanted to go for a Walk, I thought in capital letters, like it was the title of a book. My Grandpa was one of the smartest people I knew. He wasn’t “book smart.” I don’t think he even finished high school because he was born in 1899 and enlisted in the Army during World War I. I think he may have lied about his age because he fought in that war, was shot and captured and spent time in a prison camp before returning to Jeffersonville, Indiana.

He had several shrapnel and bullet wounds and the scars in his shoulder and leg were rough and the edges were jagged, as you can imagine from surgery in a prison camp. He didn’t talk about that much, although I peppered him with questions, especially after we would watch a war movie on television. He always just told me, “When it’s time for you to go, you’ll be ready.”

On our walks, we often traveled through the cemetery because Grandpa knew lots of people there. Some of the stones were beautiful, especially in the Catholic section. I never had the creepy feeling that kids often experience. I didn’t shriek or “e-w-w-w” if I accidentally stepped on a grave. I think my Grandpa made me understand there was nothing there beneath my feet. Just a box in the ground and the person whose bones were still there no longer existed.

Catholic school had Mass every morning, and of course I went on Sundays, too. The sisters and priests painted a different picture, filling my imagination with people in heaven, seated near Jesus, dressed in white robes, looking healthy and happy. I had a pretty hard time understanding how they could look like that in heaven if their bones were still here on earth. Still, the clergy didn’t scare me about dying, either. I thought it may be pretty cool to live in the clouds, with or without a harp.

In all the intervening years I’ve never become afraid of dying. I am afraid of pain or a long suffering illness. My biggest fear about dying is not actually dying, it’s about living my last days dependent on others. So many things about the end of life are not about dying, but actually are about living poorly.

A friend of mine, Kathie Conn has begun a movement here in Prince William County that has already achieved popularity elsewhere. It’s called a Death Café, and if that sounds morbid to you, I assure you it is not. It is simply an opportunity to talk about death in a way that won’t freak you out or make you say, “e-w-w-w-w”!

2 thoughts on “Are You Afraid to Die?”