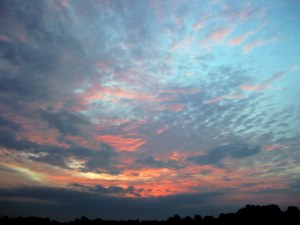 2 Chronicles 7:14: If my people, who are called by my name, will humble themselves and pray and seek my face and turn from their wicked ways, then I will hear from heaven, and I will forgive their sin and will heal their land.

Whose signature foods (frankfurters and hamburgers) are named after German cities, even if they didn’t necessarily originate with German immigrants

Whose educators educate (or attempt to educate) every child, regardless of origin, status, position, ability or income

Where most people welcome diversity of race, culture and religion

One of whose most beautiful patriotic songs was written by a poet after seeing the vista from atop Pike’s Peak.  She rode up on a mule.

Whose troops, once the war is over, do not permanently occupy a land but return home to resume their lives

Whose society has social, cultural and political problems but works to solve them

Whose people give generously to those in need, no matter who or where they are

Whose citizens do not live in a utopia, an Eden or even a city on a hill, but who are making progress toward that ideal

Whose national music was created by those brought to these shores out of their suffering, pain and hope

Whose music is diverse, energetic and ever fresh

Whose music was taken in by a bunch of young British kids in the ‘60’s and brought back to these shores in the British Invasion, changing the face of popular music forever

Whose system of justice works to guarantee rights even to the dispossessed, the powerless and the unpopular

Whose people enjoy unparalleled freedom of expression, association and mobility simply by virtue of living here

Where the airplane, the light bulb, Velcro and Post-It notes were all invented

Whose scientists and engineers sent men to the moon, not to claim it as territory, but in peace for all humankind

A place where rags to riches stories do come true

Whose writers have produced a literature that is profound and authentic, drawing on unique American experiences

What a country! God shed his grace on thee!