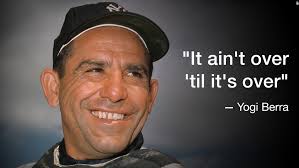 Ecclesiastes 3:11: He has made everything beautiful in its time. He has also set eternity in the human heart; yet no one can fathom what God has done from beginning to end.
I don’t know if you’re familiar with those words of the title from baseball great Casey Stengel. He sometimes spoke in what was called “Stengelese,” including sayings like, “Nobody goes there anymore. It’s too crowded,” or, “Good pitching will always stop good hitting and vice-versa.” Think about that last one for a while.
I was thinking about Casey’s observation about a game not being over until it’s finished and I thought of some other occasions where it’s important to know when something is finished and when it is still going on.
Perhaps you’ve been at a concert, and the director holds the singers for a grand pause. Anyone who knows about music understands that there is more to come, but there are those who believe that because the song has stopped and the director’s hands have stopped, the song is over and the time for wild applause is nigh. And so it begins.
Awkward. There’s no going back. The mood has been ruined for anyone who didn’t clap, the director, the singers and who knows who else.
All of you know the words of the poet of Ecclesiastes, “There is a time to be born, and a time to die; a time to plant, a time to reap that which is planted; A time to kill, and a time to heal; a time to break down, and a time to build up; A time to weep, and a time to laugh; a time to mourn, and a time to dance.” God created our experiences and the universe with these pairings of opposites and it is by knowing and experiencing them that we understand something about the nature of God.
Praise God for opposites, for time, for being in time and yet somehow beyond it so that we, going through the ebb and flow of our lives, may accept God’s gift of his Son, who experienced, suffered and enjoyed as we do, and gave up his life that we might live with Him beyond time. Amen